Send us an email

In the early 1970's, Zog was shaping boards and running a small surf shop in Goleta, California. As fate would have it, a chemist named Nate Skinner worked in a building next to Zog's shop. Zog and Nate got to talking and decided that with Nate's scientific training and Zog's surfing background, they were the perfect pair to develop a unique, high-performance surfboard wax.

Over the course of the next year, Nate created and modified various wax prototypes, which Zog tested and evaluated under actual surfing conditions. Eventually they arrived at a formula that met their specifications.

When the first batch of Sex Wax was ready for market, Zog loaded up his Ford pickup truck and hit the road on a sales run. For the next few days, he stopped at every surf shop he could find from Santa Cruz to San Diego, trying to interest owners in purchasing a case of wax. At first, many retailers were reluctant to stock a new wax with a "suggestive" label and no track record. A few, however, were intrigued by the catchy name and decided to give it a try.

Over time, praise for the new wax spread up and down the California coast, and demand for the product grew steadily. Convenience stores and surf shops that had originally declined to carry Sex Wax, now called and asked to be included on the list of businesses Zog visited on his monthly sales runs. Soon, surfers from the East Coast, Gulf States, Hawaii and Japan wanted stores and shops in their areas to stock Zog's wax, and within a few short years, Sex Wax reached a world-wide market. 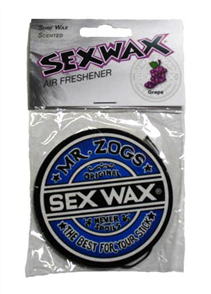 In stock - ships today
Send us an email for this product